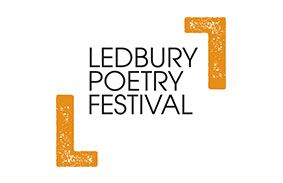 Organised by
THE LEDBURY POETRY FESTIVAL

Ledbury Poetry Festival celebrates both poets of the past and contemporary poetry – the Festival aims to be broadly appealing, inspiring, as well as challenging and stimulating – enabled by the range of events, poets and performers involved. In 2014 the Festival welcomed poets including Sharon Olds, Robert Hass and Anne Michaels. The Festival held a Poetry Retreat at Adhisthana, a new Buddhist community near Ledbury. Actress Juliet Stevenson read poems by Elizabeth Bishop. Singer and musician Alasdair Roberts performed bare bones music to verse about remote St Kilda by poet Robin Robertson. Alasdair Roberts also discussed lyric and song with Mary Hampton. Baddaboom Tee led a beatboxing workshop for families. Sound recordist Chris Watson and poet Linda France made a new piece evoking the passage of the seasons in a wilder patch of Northumberland through a synergy of natural sounds and poetry. Clare Short who resigned from government over the Iraq war shared the poems she would elect to be stranded with on a desert island. And much more besides.

Lebury Poetry Festival is much loved by poets – ‘a rare and genuine joining of place, poetry and people’ according to Carol Ann Duffy. David Morley writes, ‘The programming is skilful and highly adventurous...I have seldom come across a poetry audience with such attentiveness, warmth and intelligence.’ Poets return year after year and the Festival is also committed to nurturing new poets. An important part of what we do is send poets into local schools, last year reaching 2000 children, and growing.

Ledbury Poetry Festival evolved out of connections with poets including Edward Thomas, Robert Frost, John Masefield and Elizabeth Barrett Browning.  The ‘Dymock poets’ because Edward Thomas and Robert Frost both spent time just outside Ledbury in Dymock before WW1 and their ‘talks-walking’ had a huge impact on both poets. Also Ledbury was the birthplace of John Masefield and Elizabeth Barrett Browning. Mystical poets Thomas Traherne and William Langland, whose Piers Plowman came to him on the Malvern Hills. The Mappa Mundi is at Hereford Cathedral and this has also inspired many poems.